By Orion M. Zink, Lodge Historian, 1976
All Masons in good standing with their respective Lodges are requested to assemble at the Exchange Hotel, in the City of San Diego, on Friday evening, the 20th inst., to make arrangements for the celebrating of the anniversary of our patron saint, John the Baptist. --San Diego Herald, June 19, 1851

Thus began the history of San Diego Lodge No. 35. The formation of San Diego Lodge is said to have been suggested when, during a picnic, it was discovered that there were a number of Masons among the newcomers into the city. Just who suggested the idea is unknown. However, John Judson Ames, owner-editor of the San Diego Herald, certainly had a part in it as indicated by the notice above that was printed in his newspaper.
Apparently at this meeting, a petition for a dispensation was drawn up and forwarded to Grand Lodge. The petition was granted and signed by the Right Worshipful B.D. Hyam, Deputy Grand Master, on August 1, 1851, and the name "San Diego Lodge" bestowed. A notice of the granting of the dispensation appeared in the Herald on September 4, 1851. In this notice, William C. Ferrell is named Master, John Judson Ames as Senior Warden, and John Cook as Junior Warden. The notice also stated that "they will begin work as soon as the rooms can be fitted up."
On October 9, 1851, the Herald printed this notice: There will be a meeting of San Diego Lodge, F.&A.M., at the house of Col. A. Haraszthy, on Friday evening next 10th inst. At half past six o'clock. A full attendence is urged as business of importance is to be transacted. Per order of Worshipful Master.
Fortunately, for history's sake, these notices were published by the Herald, for if records were kept of the first meeting at the Exchange Hotel and the subsequent one at Haraszthy's house they were evidently lost.
The first meeting where minutes were kept was that held on November 20, 1851. At that meeting, those named as being present were Wm. C. Ferrell, W.M.; John Judson Ames, S.W.; Daniel Barbee, J.W.; R. E. Raymond, Treasurer; A. Haraszthy, Secretary; Wm. H. Moon, Tiler. In addition to these, James W. Robinson, Wm. Heath Davis and John Cook are mentioned as others to whom the dispensation was granted. It is interesting to note that nine brethren are mentioned, all of whom must be regarded as founders of the Lodge. This is in spite of the fact that on two seperate occasions, in the Herald, Ames states that there were only seven present at the first meeting, which suggests that he was reffering to the first meeting, which was held in the Exchange Hotel.
William C. Ferrell, the first Master of the Lodge, was a lawyer and came from South Carolina. He served as San Diego's first District Attorney. John Judson Ames, a Goliath of a man, 6 foot 6 inches tall and weighing 250 pounds, was born in Maine. He was the owner and editor of San Diego's first newspaper called, the Herald. James W. Robinson, the Lodge's first Secretary, who later served as Master, was born in Ohio. He was Lieutenant Governor, and then Governor of the State of Texas. Upon establishing his residence in San Diego, he put up his shingle and practiced law for a while. He held the office of District Attorney from 1852 to 1856. R. E. Raymond was a shipping and commission merchant and served as a member of the City Council in 1852. Where he came from is not known. He left San Diego in 1853 and settled in San Francisco, where he continued in the shipping business. Daniel Barbee was a Major in the U.S. Army, in command of certain units stationed here at that time. William H. Moon was immortalized by Derby in his book Phoenixiana, where he is referred to as the "Squire". Derby describes him as a "jovial middle-aged gentleman from the state of Georgia, who replied to my inquiries as to his state of health, that he was 'fine as silk but not half so well beliked by the ladies'". John Cook was Assemblyman from this District. Agostin Haraszthy, Sheriff of San Diego County, City Marshal, and later Assemblyman, was a native of Hungary. His family had been prominent in Hungarian society for over seven hundred years. Agostin was Colonel in King Ferdinand's bodyguard of nobles, and rated the title of Count. It was in his home at Old Town that the first public school classes were held. After he left San Diego, he and his sons introduced over 400 varieties of grapes in Sonoma County, and they were the first to successfully manufacture champagne in California. Grand Lodge records of 1851 and 1852 have Haraszthy erroneously listed as A. Hartley. 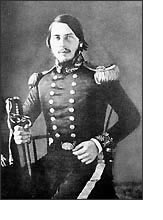 Of course, the list of founding fathers of San Diego Lodge No. 35 would not be complete without the mention of Lt. George H. Derby, who was with the U.S. Army Engineer Corps and in charge of the work of diverting the waters of the San Diego River into Mission Bay, which was at that time known as False Bay. He was a member of Federal Lodge in Washington D.C. and helped organize Sonoma Lodge, U.D., which later became Temple Lodge No. 14, where he was the first Master.